Her Linkup TV program on Katanka TV will undoubtedly be one of the most watched program come Friday, as she is determined to open some hidden wounds

Social Media was set ablaze last Saturday following a fiasco engineered by Slay-Mama , Mona Gucci against herself on United Showbiz on UTV.

The television presenter on Saturday, February 20, 2021 boasted on live TV of being a lawyer who had her internship with Abigail Williams and Co in Worcester Massachusetts after schooling at Massachusetts School of Law in 2017.

“I did Immigration Law in America… I can’t practice it in Ghana,” she said,

Eliciting a follow-up question from the host Nana Ama McBrown as regards why she abandoned the law profession for showbiz in Ghana, Mona said “I worked for a while before coming to Ghana. At least, for two or three years. I worked with a firm.”.

Some viewers of the show however picked holes in her narrative. They flooded various social media pages with messages taunting Mona Gucci for what they said were lies spewed by the showbiz personality.

Her response, however, could not save her from the public backlash and mockery as she topped social media trends.

“What baffled me on the United showbiz yesterday.. was they forgot who they were tryna conspire against? MONA GUCCI?? How can y’all stoop this low…? Now am forced to open keys n shake tables on linkup show on Friday—Sorry,” her post read

Mona’s post has had some reactions including suggestions that she should rather admit her fault and move on instead of resorting to a damage control mechanism which will eventually be a shoot in the foot.

READ  ' I Have To Be In The Artiste Of The Year Category Next Year' - Kofi Mole.

However, the embarrassed Slay-queen is poised to open chapters on her Katanka TV show on Friday. 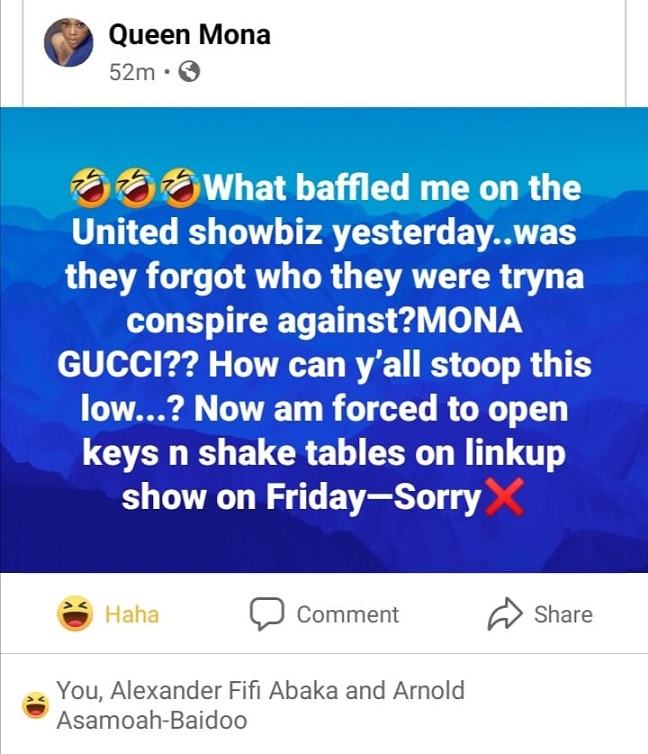 ‘If you are in your prime today, it doesn’t give you the impetus to denigrate a pace setter like Guru ; show some level...